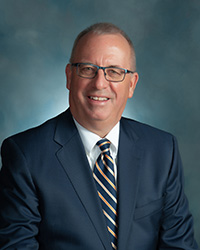 Ryan M. Warner, chairman and CEO of Bippus State Bank, Huntington, is being honored by the Indiana Bankers Association with the IBA Leaders in Banking Excellence award, to be presented at a private ceremony in December in Indianapolis. This award, the Association’s highest honor, celebrates exceptional leaders who have positively impacted Indiana banks and the communities they serve.
At the upcoming awards event, Indiana dignitaries from private and public sectors will be making presentations, and honorees will have the opportunity to offer comments. Additionally, participants will be invited to visit the IBA offices to view the Leaders in Banking Excellence wall, with plaques showcasing each honoree to remain on permanent display. Each honoree is to receive a keepsake plaque at the awards ceremony.
The 2020 Leaders in Banking Excellence represent a range of current and retired leaders in banking. All were nominated by IBA members and approved unanimously by the IBA Board of Directors.
Warner biography:  Ryan M. Warner has devoted his full career to Bippus State Bank, Huntington. He joined the organization in 1977, was promoted to president in 1987, and was named chairman of the board and CEO in 2019. Active in the banking community, he serves as a director of the Federal Home Loan Bank of Indianapolis. Additionally, Warner was 1992-93 chairman of the Community Bankers Association of Indiana, which later merged with the Indiana Bankers Association.
His community leadership includes service as past president and current board secretary of Huntington County Economic Development, as a member of the President’s Advisory Council on Excellence at Huntington University, and as past president of the board of Parkview Huntington Hospital. A member of the IBA 40 Year Club, Warner is a graduate of International Business College and of the Graduate School of Banking at the University of Wisconsin.

BSB Donates Coffee and Pastries to Community Teachers and Staff